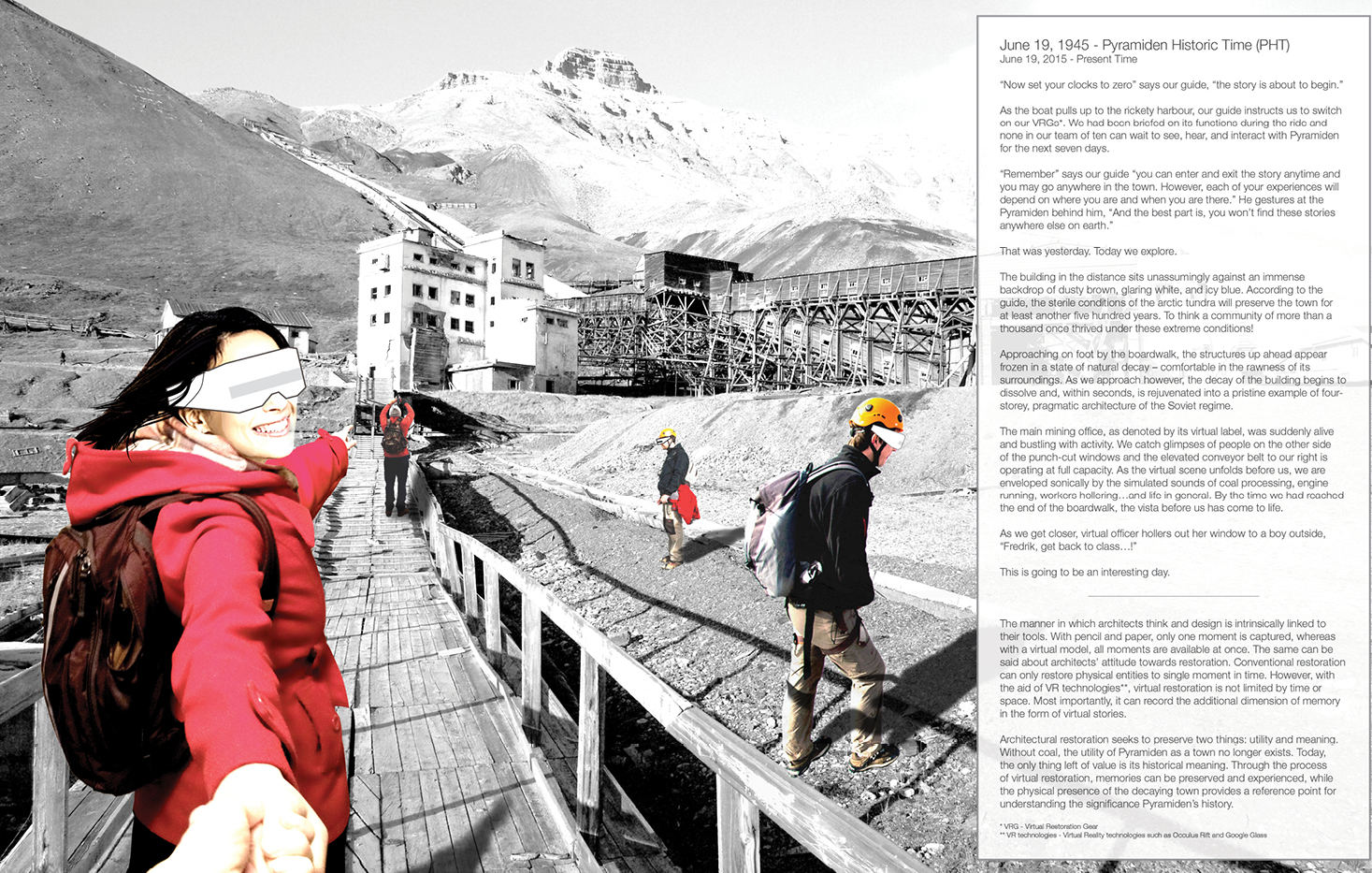 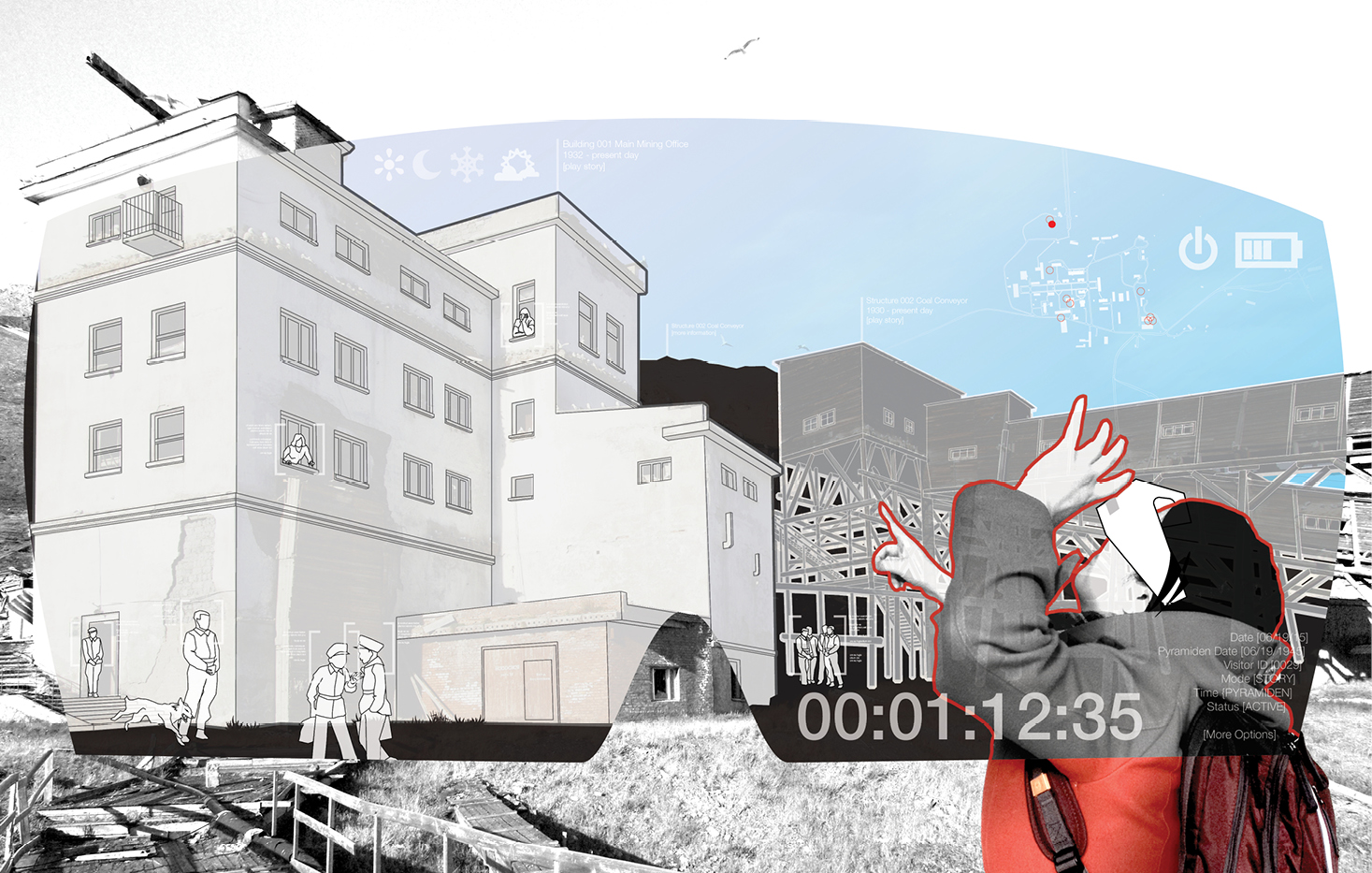 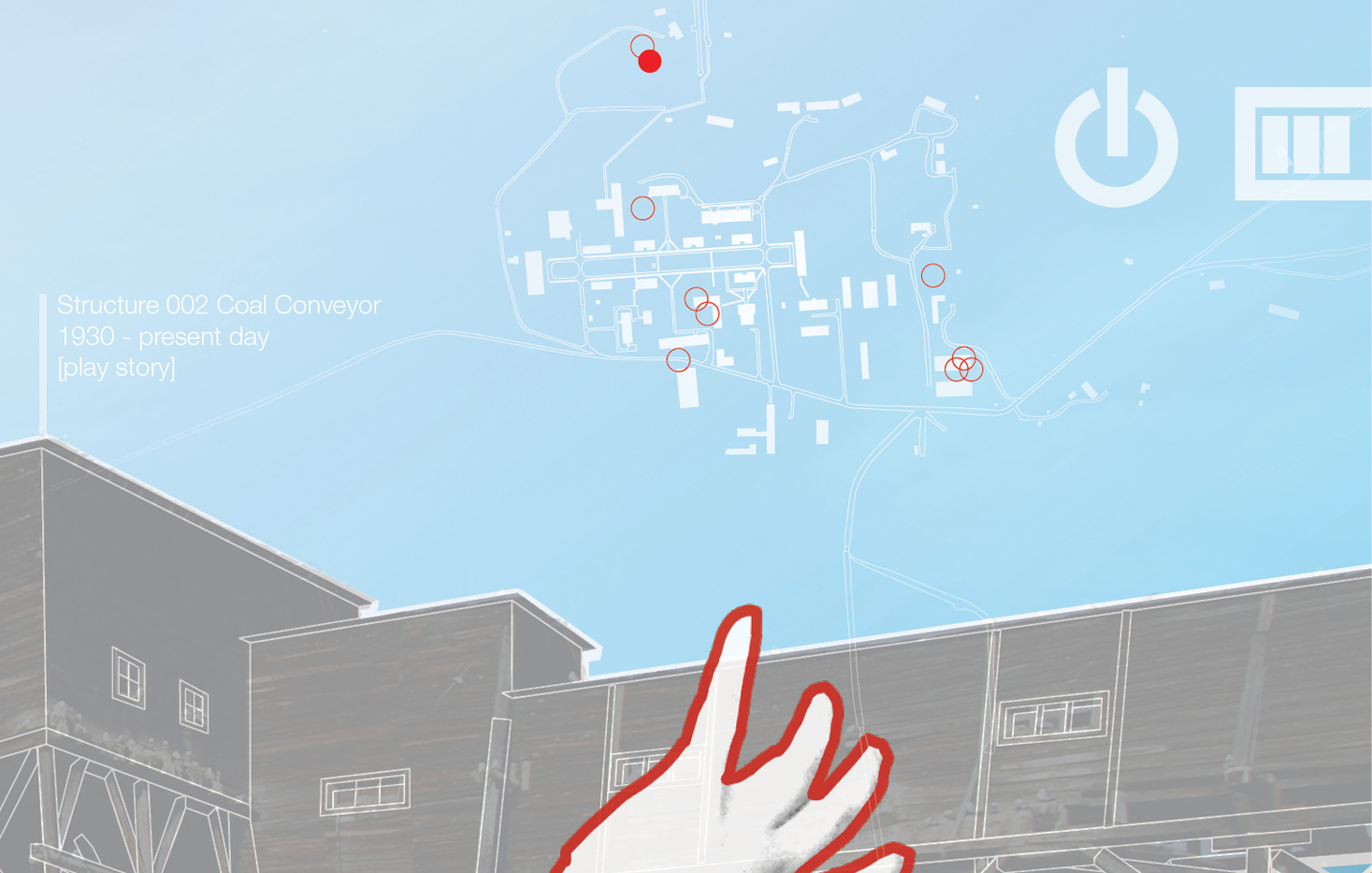 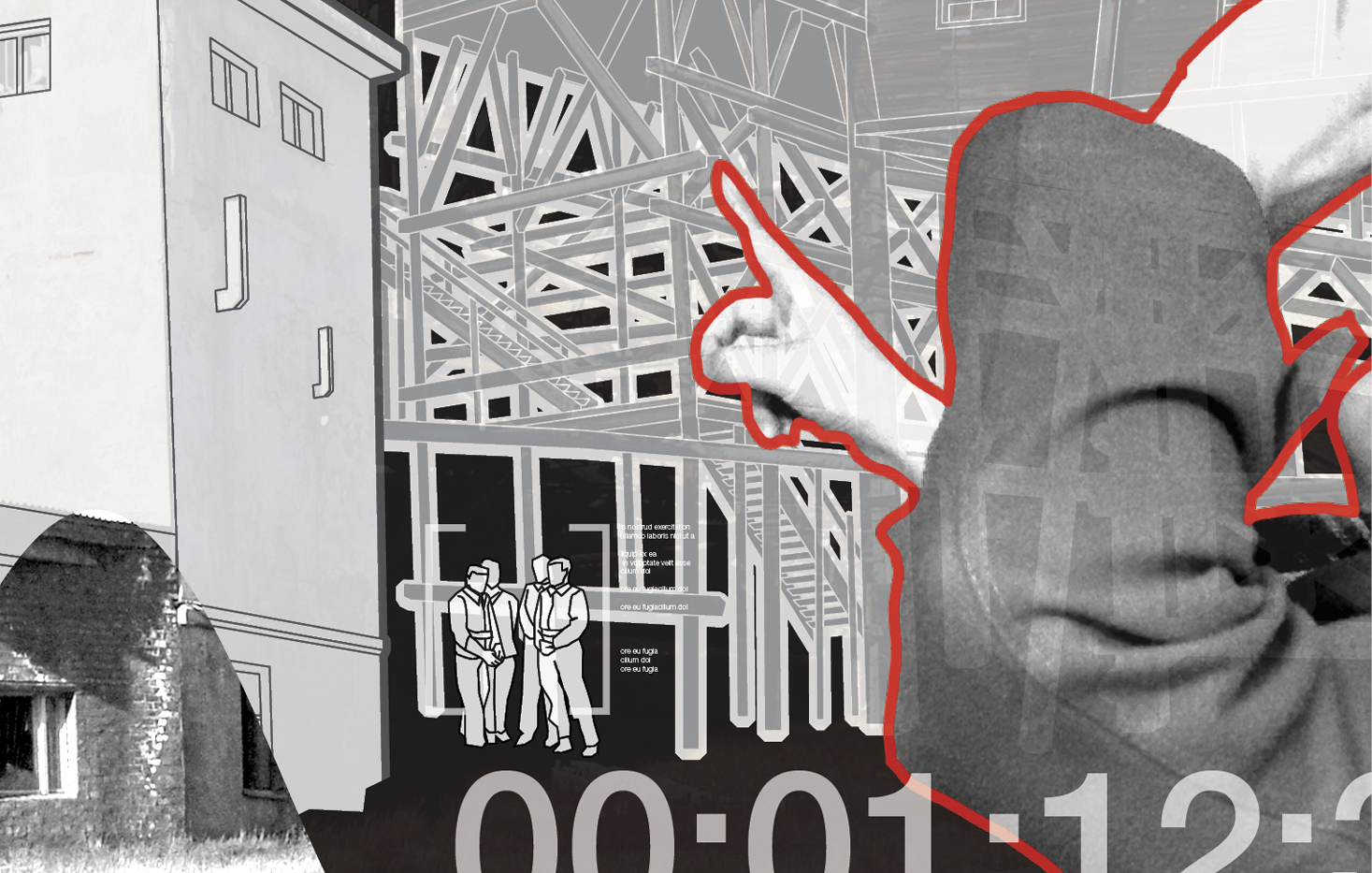 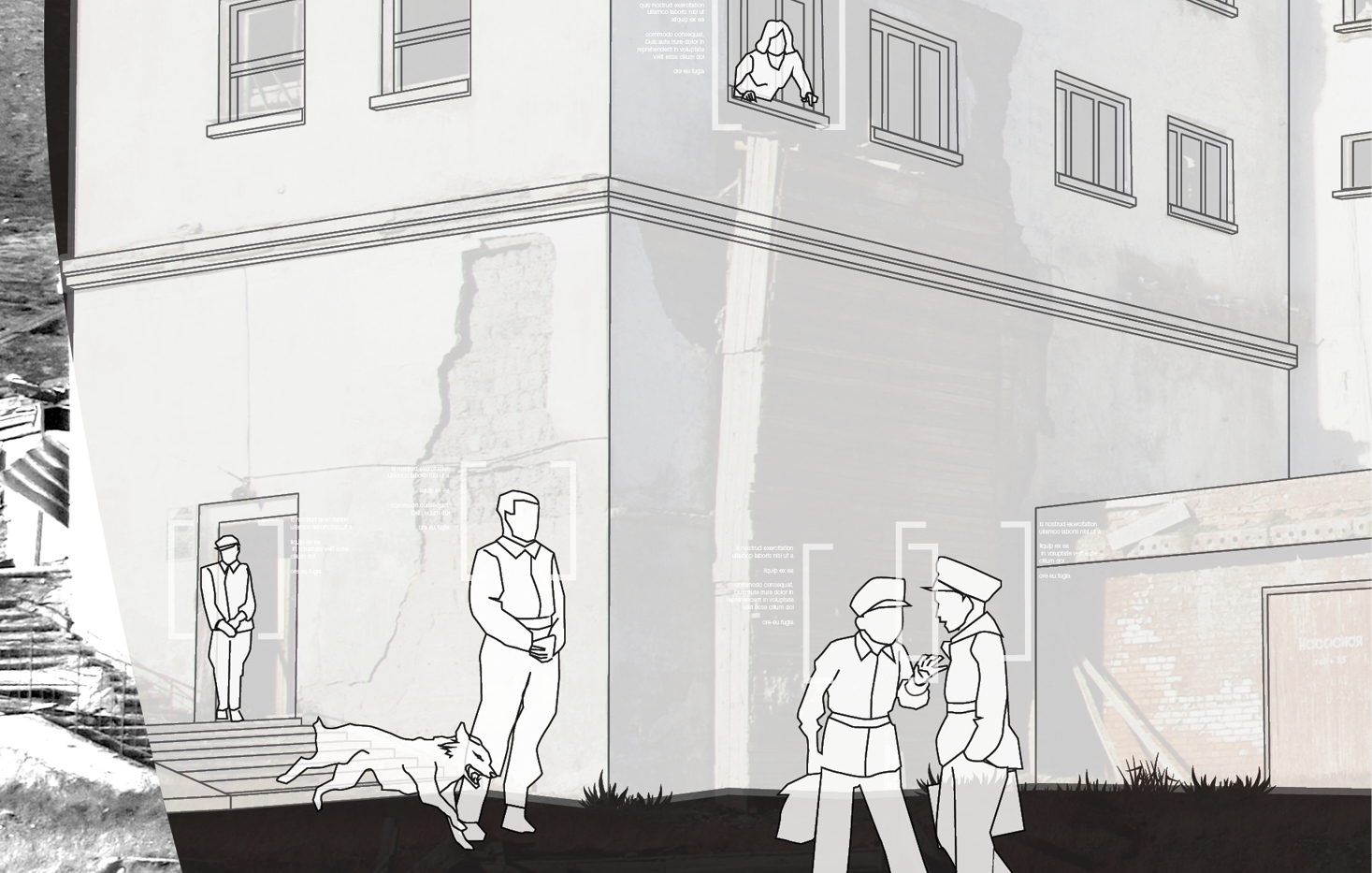 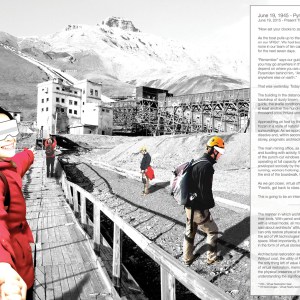 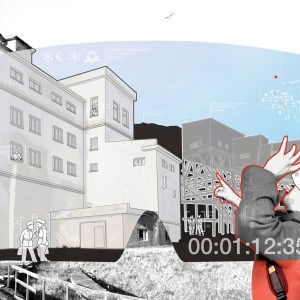 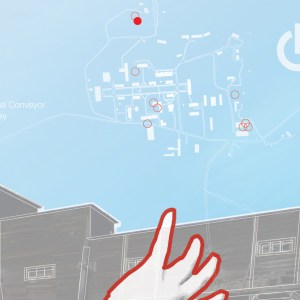 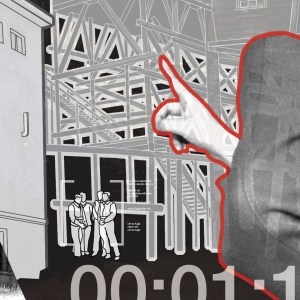 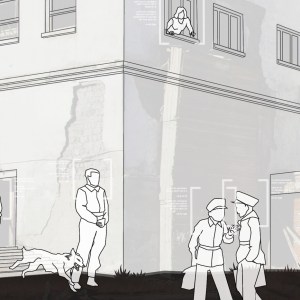 “Now set your clocks to zero” says the guide, “the story is about to begin”.

As the boat pulls up to the rickety harbour, our guide instructs us to switch on our VRGs*. We had been briefed on its functions during the ride and none in our team of ten can wait to see, hear, and interact with Pyramiden for the next seven days.

The town in the distance sits unassumingly against an immense backdrop of dusty brown, glaring white, and icy blue. According to the guide, the sterile conditions of the arctic tundra will preserve the town for at least another five hundred years. To think a community of more than a thousand once thrived under these extreme conditions!

On foot now and approaching from the harbour, the buildings up ahead appear frozen in a state of natural decay – comfortable in the rawness of its surroundings. As we approach however, the decay of the closest building begins to dissolve and, within seconds, is rejuvenated into a pristine example of four-storey, pragmatic architecture of the Soviet regime.

The customs and shipping office, as denoted by its virtual label, was suddenly alive and bustling with activity. We catch glimpses of people on the other side of the punch-cut windows and the elevated conveyor belt to our right is operating at full capacity. As the virtual scene unfolds before us, we are enveloped sonically by the simulated sounds of coal processing, engine running, workers hollering…and life in general. By the time we had reached the end of the boardwalk, the vista before us had literally awakened.

“Remember” says our guide “you can enter and exit the story anytime and you may go anywhere in the town. However, each of your experiences will depend on where you are and when you are there.” He gestures at the Pyramiden behind him, “And the best part is, you won’t find these stories anywhere else on earth.”

As he walks away, a virtual officer hollers out her window to a boy outside, “Fredrik, get back to class…!”

This is going to be an interesting week.

The manner in which architects think and design is intrinsically linked to their tools. With pencil and paper, only one moment is captured, whereas with a virtual model, all moments are available at once. The same can be said about architects’ attitude towards restoration. Conventional restoration can only restore physical entities to single moment in time. However, with the aid of VR technologies*, virtual restoration is not limited by time or space. Most importantly, it can record the additional dimension of memory in the form of virtual stories.

Architectural restoration seeks to preserve two things: utility and meaning. Without coal, the utility of Pyramiden as a town no longer exists. Today, the only thing left of value is its historical meaning. Through the process of virtual restoration, memories can be preserved and experienced, while the physical presence of the decaying town provides a reference point for understanding the significance Pyramiden’s history.