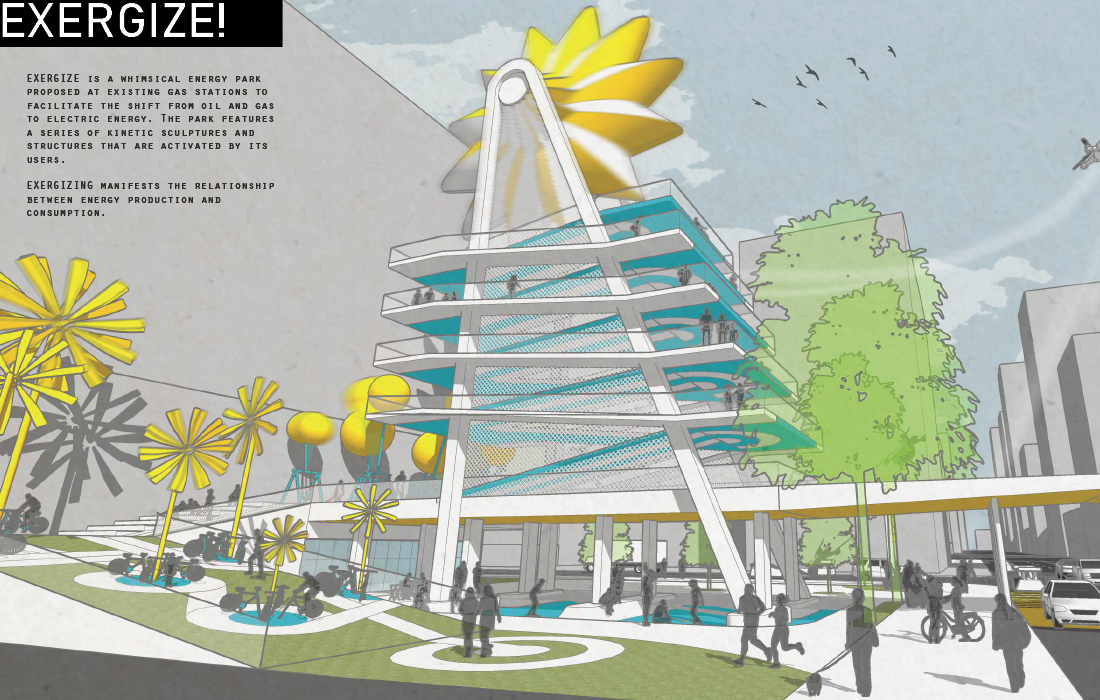 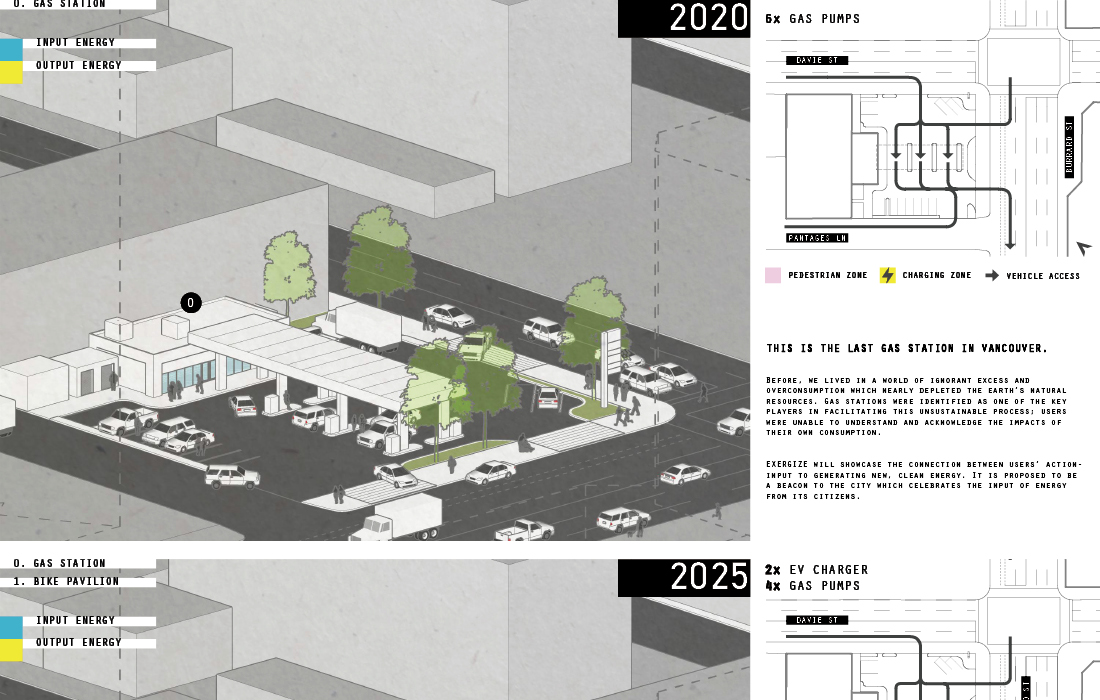 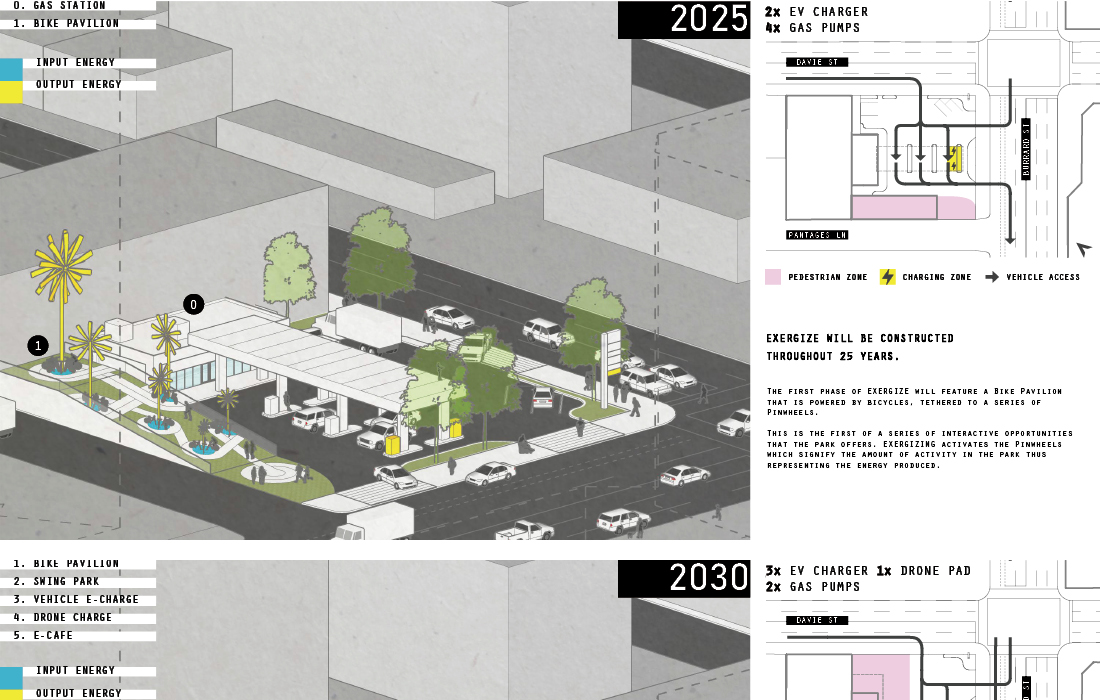 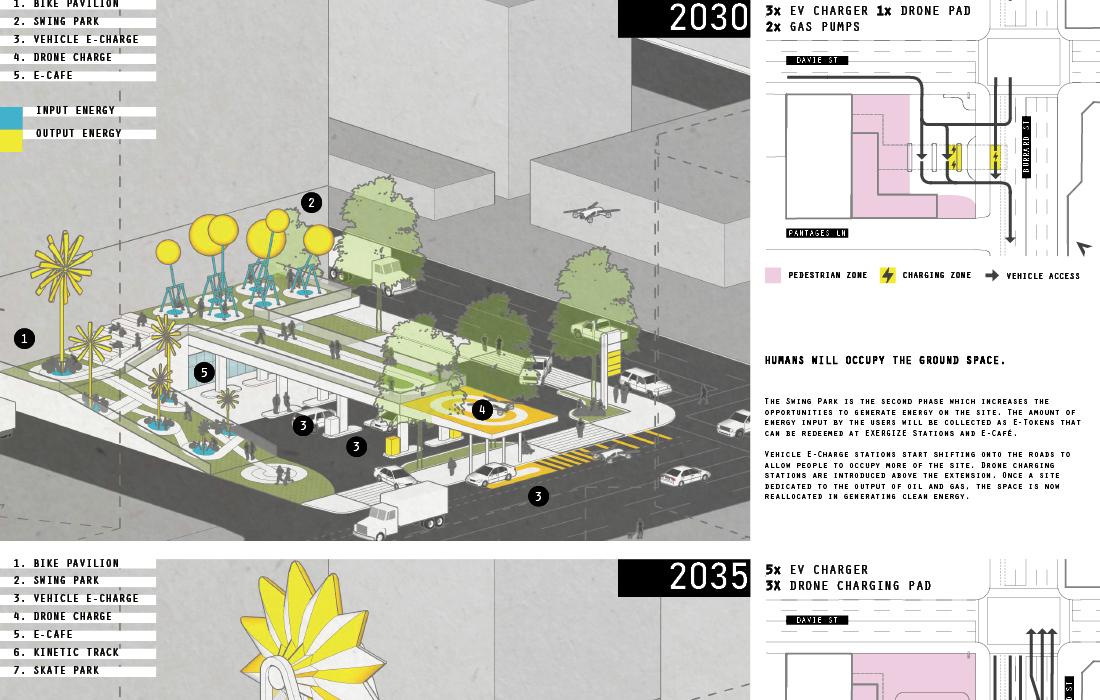 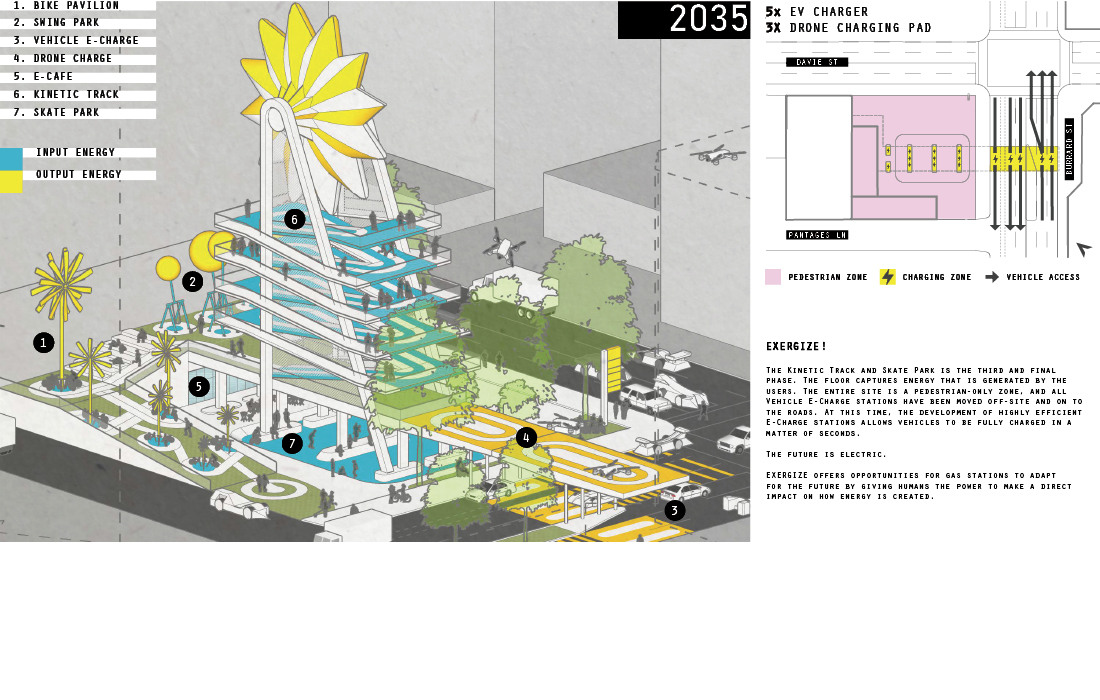 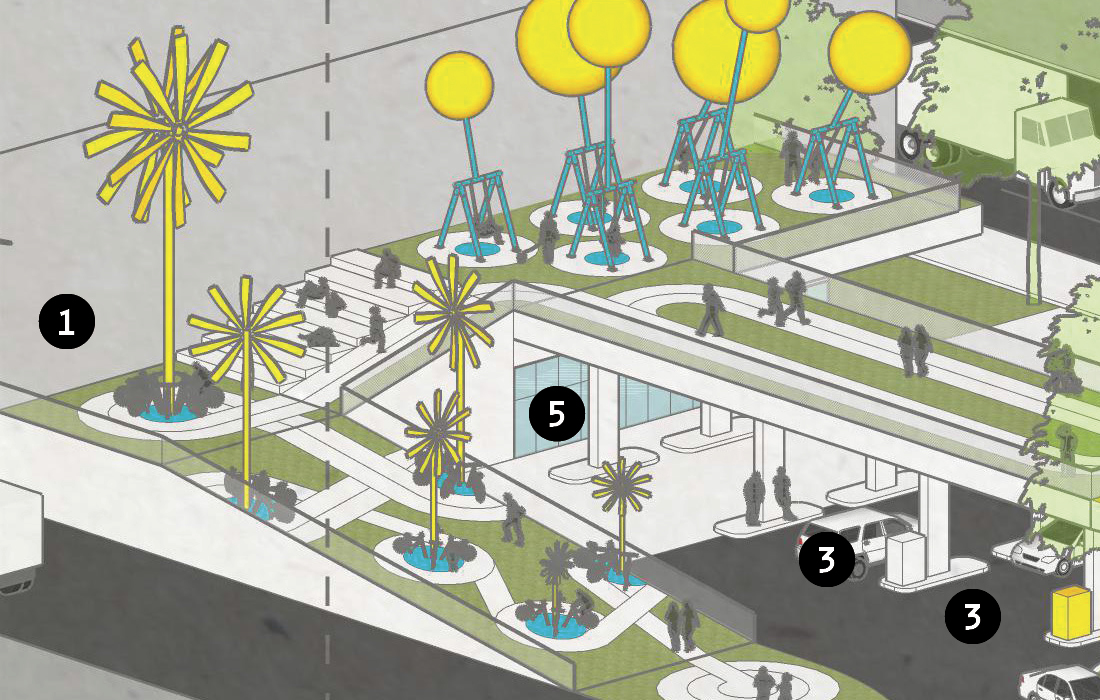 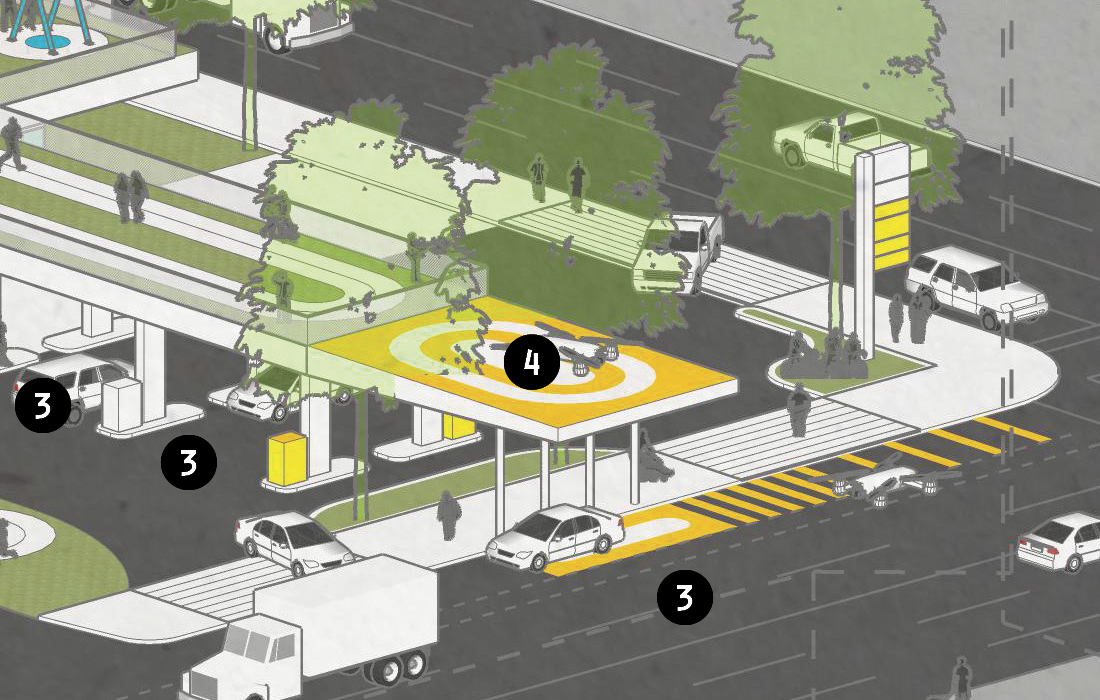 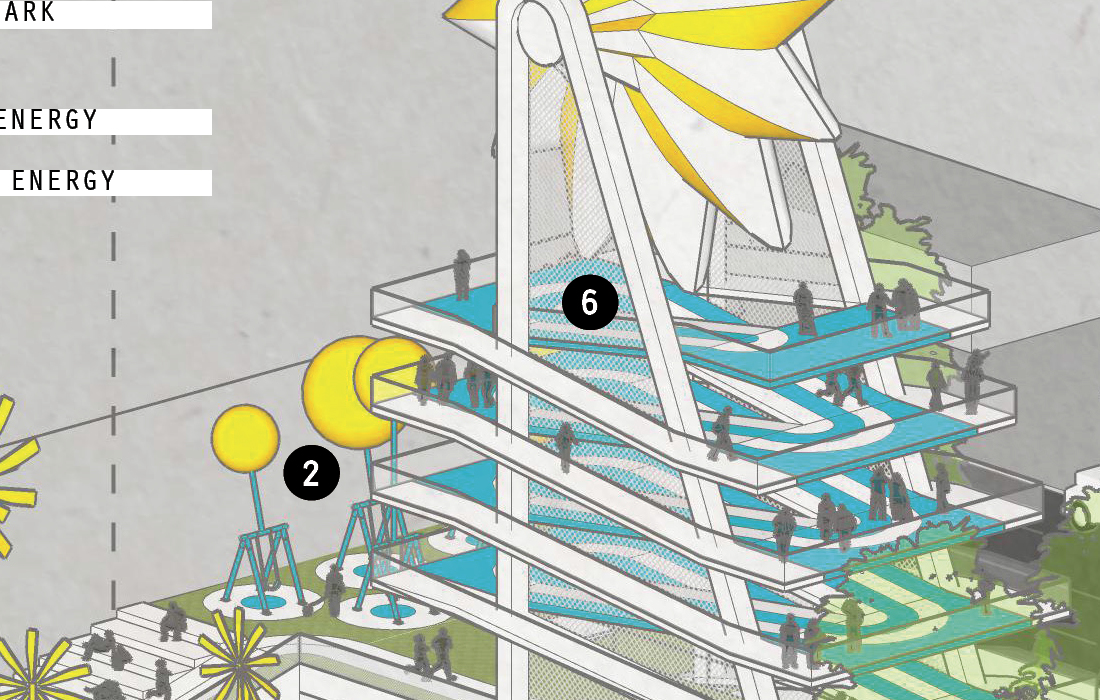 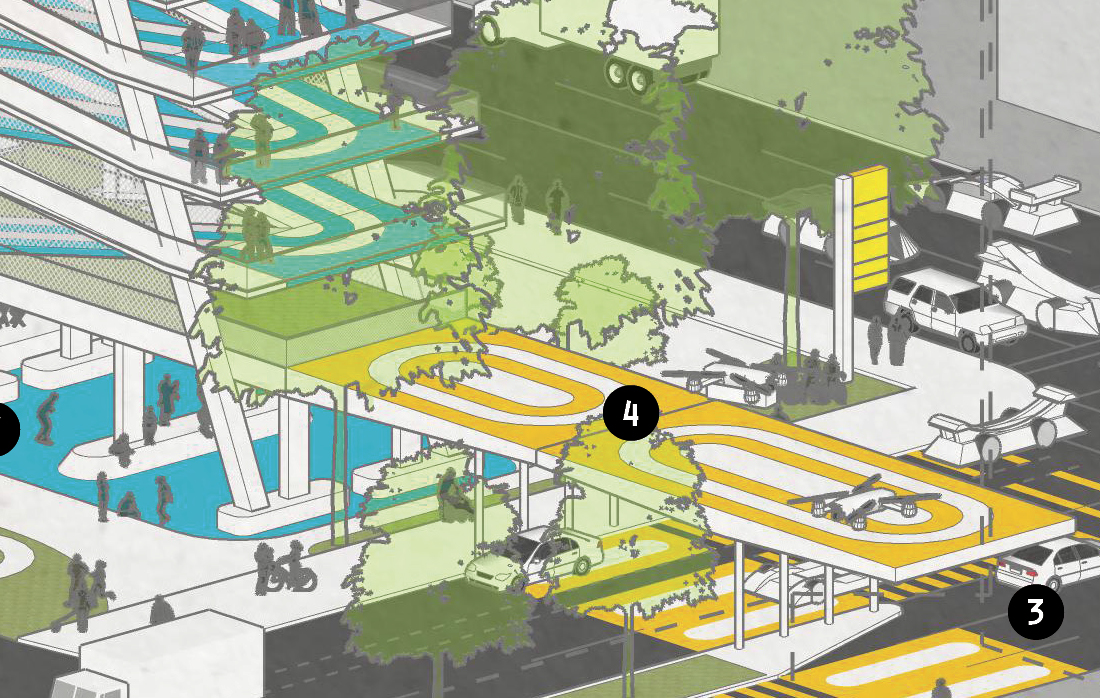 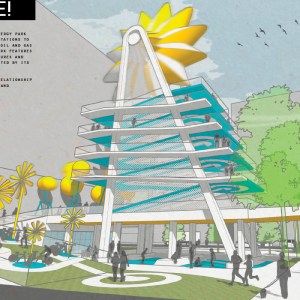 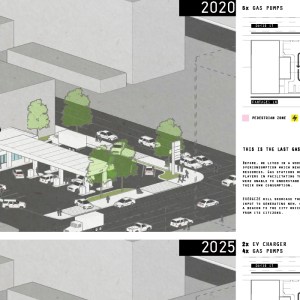 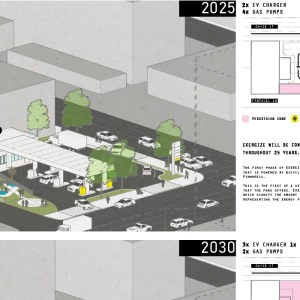 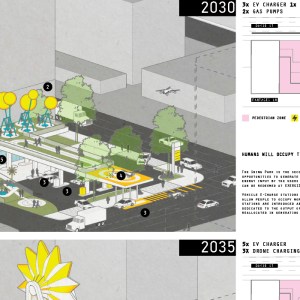 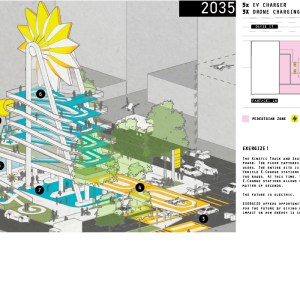 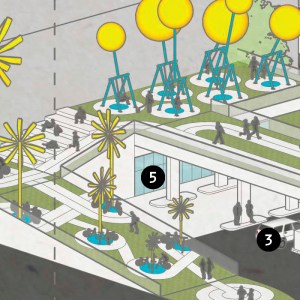 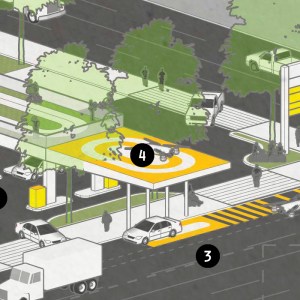 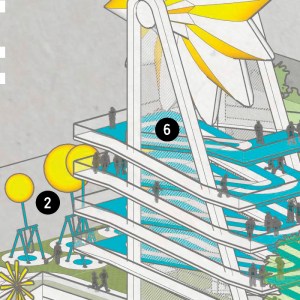 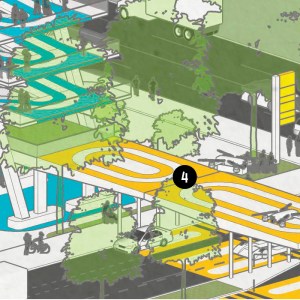 EXERGIZE is a whimsical energy park proposed at existing gas stations to facilitate the shift from oil and gas to electric energy. The park features a series of kinetic sculptures and structures that are activated by its users.

EXERGIZING manifests the relationship between energy production and consumption.

Before, we lived in a world of ignorant excess and overconsumption which nearly depleted the earth’s natural resources. Gas stations were identified as one of the key players in facilitating this unsustainable process; users were unable to understand and acknowledge the impacts of their own consumption.

EXERGIZE will showcase the connection between users’ action-inputto generating new, clean energy. It is proposed to be a beacon to the city which celebrates the input of energy from its citizens.

2025 – XERGIZE WILL BE CONSTRUCTED THROUGHOUT 25 YEARS.

The first phase of EXERGIZE will feature a Bike Pavilion that is powered by bicycles, tethered to a series of Pinwheels. This is the first of a series of interactive opportunities that the park offers.

EXERGIZING activates the Pinwheels which signify the amount of activity in the park thus representing the energy produced.

2030 – HUMANS WILL OCCUPY THE GROUND SPACE

The Swing Park is the second phase which increases the opportunities to generate energy on the site. The amount of energy input by the users will be collected as E-Tokens that can be redeemed at EXERGIZE Stations and E-Café.

Vehicle E- Charge stations start shifting onto the roads to allow people to occupy more of the site. Drone charging stations are introduced above the extension. Once a site dedicated to the output of oil and gas, the space is now reallocated in generating clean energy.

The Kinetic Track and Skate Park is the third and final phase. The floor captures energy that is generated by the users. The entire site is a pedestrian-only zone, and all Vehicle E-Charge stations have been moved off-site and on to the roads. At this time, the development of highly efficient E-Charge stations allows vehicles to be fully charged in a matter of seconds.
The future is electric.

EXERGIZE offers opportunities for gas stations to adapt for the future by giving humans the power to make a direct impact on how energy is created.