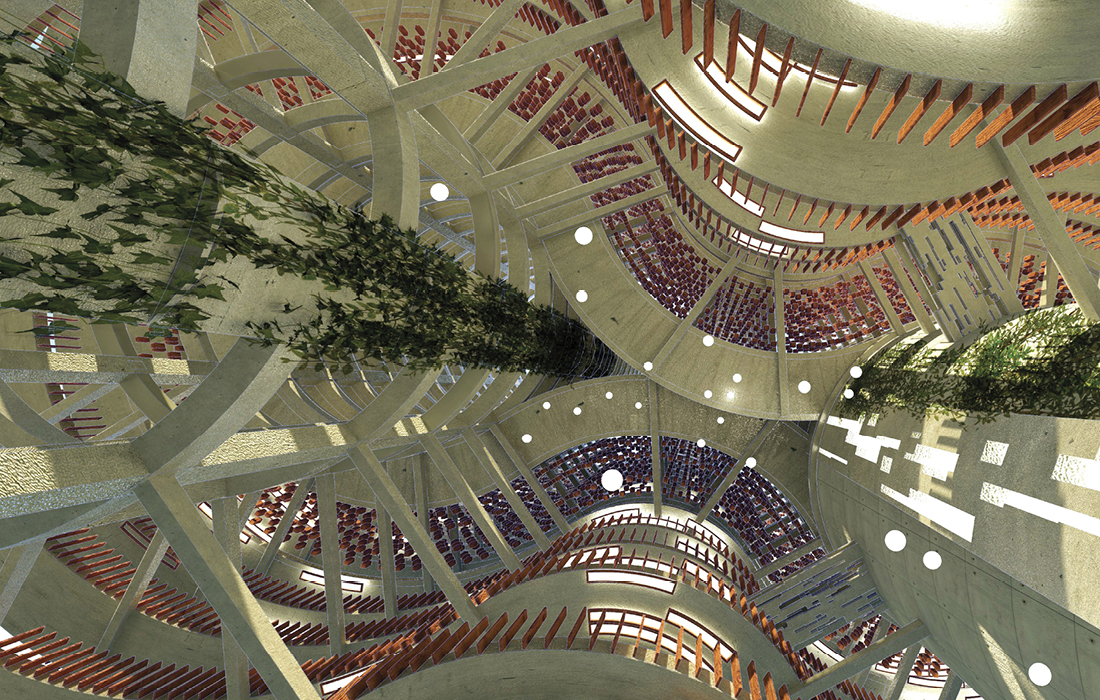 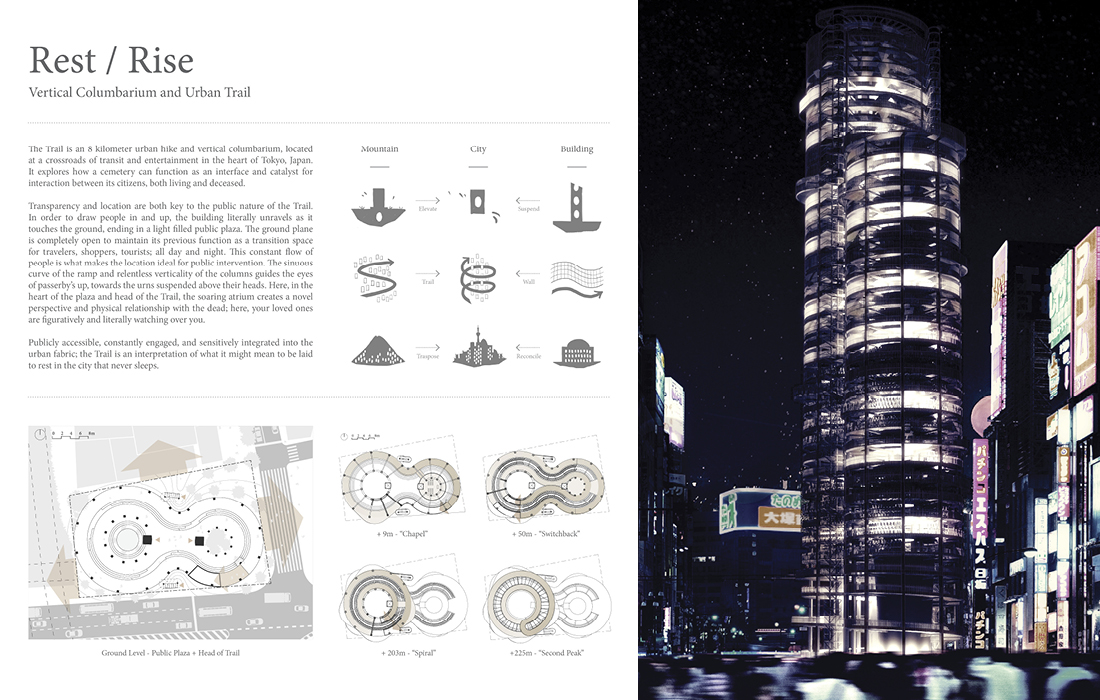 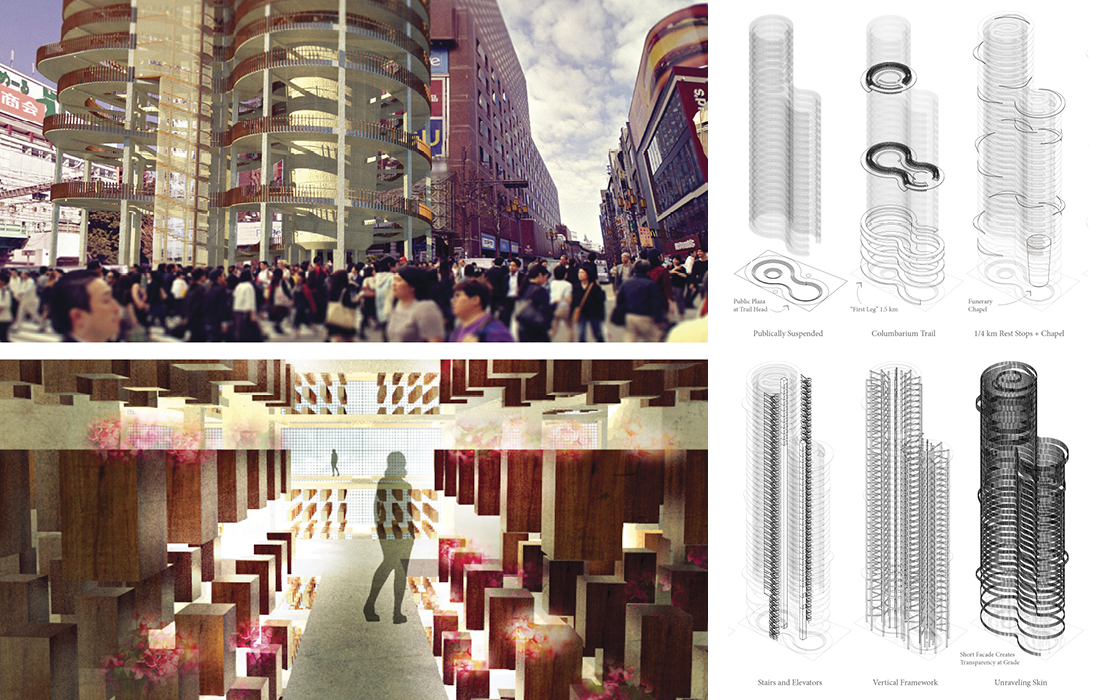 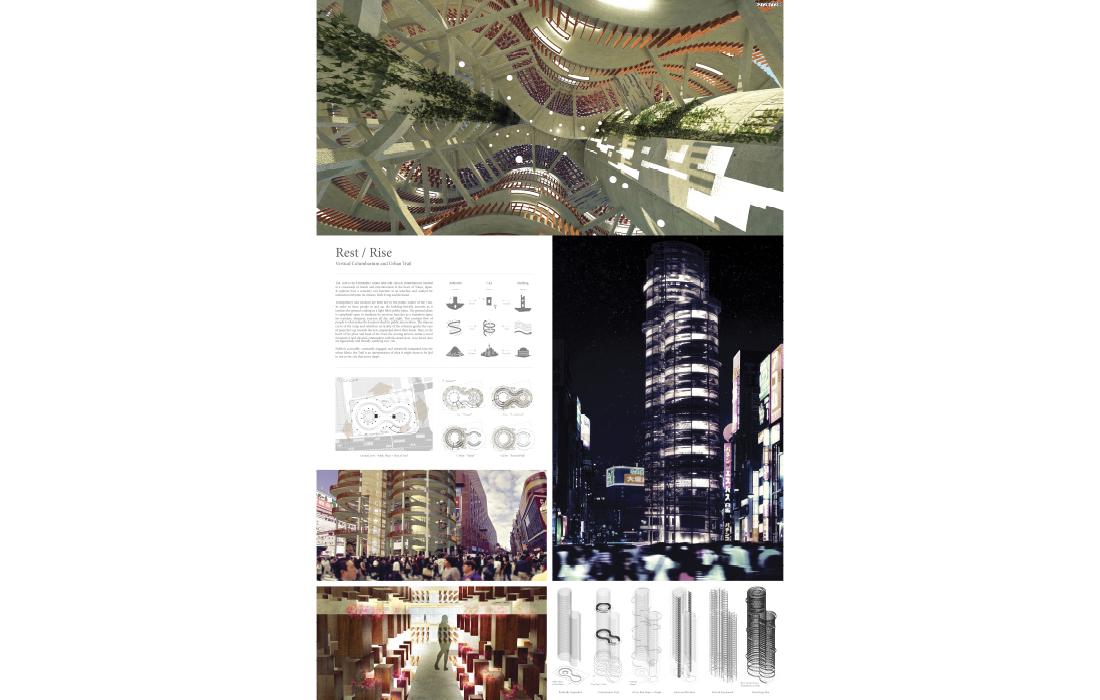 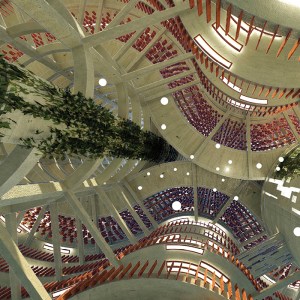 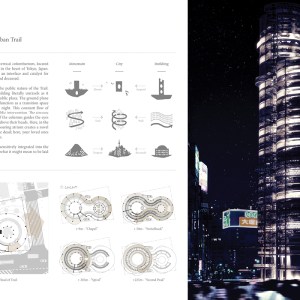 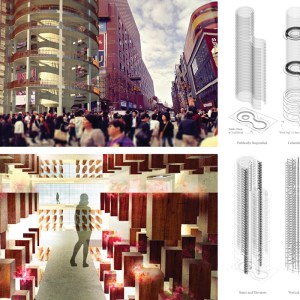 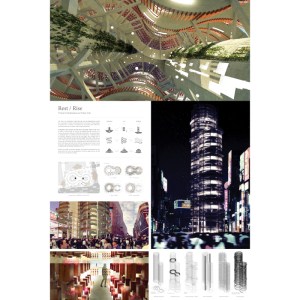 The Trail is an 8 kilometer urban hike and vertical columbarium, located at a crossroads of transit and entertainment in the heart of Tokyo, Japan. It explores how a cemetery can function as an interface and catalyst for interaction between its citizens, both living and deceased.

Design of the Trail draws on concepts from two traditional types of burial: the mountain burial and the columbarium wall.

In the densely forested mountains of Japan, the journey to a burial site is a purposeful act that revives the body and prepares the mind – it is this sense of mindful interaction with one’s environment that is often missing in a fast paced metropolis such as Tokyo. Thoughtful integration of spaces for the dead into the most frantic parts of the city may offer a rare opportunity to stop and reflect. When adapted to an urban context, the concept of “journey” takes the form of a pathway, an extension of the sidewalk, that meanders steadily upwards and culminates at two “peaks”, 100 and 125 meters above the city streets. Each quarter kilometer is marked by a rest stop off the side of the path. These stops provide both physical and visual release, with views that open up to the city around it.

After 1.5 kilometers, hikers enter the columbarium proper. For most of the Trail, the path runs alongside a wall of funerary urns. However unlike a traditional columbarium, the wall is not solid, nor is it grounded; the wall is composed of a matrix of suspended containers, a curtain of urns, which allow light, air, and views to penetrate the building. The resulting transparency permits visitors a glimpse of the scale of death, as one can clearly see the containers stretching forwards, backwards, upwards, downwards. In total, 33 levels of columbarium holds 51,725 urns.

Transparency and location are both key to the public nature of the Trail. In order to draw people in and up, the building literally unravels as it touches the ground, ending in a light filled public plaza. The ground plane is completely open to maintain its previous function as a transition space for travelers, shoppers, tourists; all day and night. This constant flow of people is what makes the location ideal for public intervention. The sinuous curve of the ramp and relentless verticality of the columns guides the eyes of passerby’s up, towards the urns suspended above their heads. Here, in the heart of the plaza and head of the Trail, the soaring atrium creates a novel perspective and physical relationship with the dead; here, your loved ones are figuratively and literally watching over you.

Publicly accessible, constantly engaged, and sensitively integrated into the urban fabric; the Trail is an interpretation of what it might mean to be laid to rest in the city that never sleeps.